This weekend a group of art lovers and gun control activists gathered in the First Congregational United Church of Christ in the middle of Washington, DC for an exhibition called: 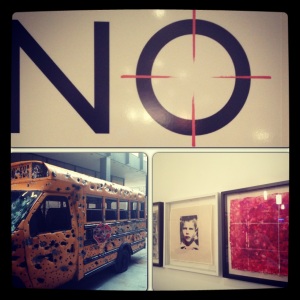 The exhibition with 33 artists has been assembled by veteran journalist Charles Krause Reporting Fine Arts Gallery in memory of the murdered 26 students and six teachers at Sandy Hook Elementary School in Newtown, Connecticut in December last year.
Outside the church, the Canadian artist Viktor Mitic’s school bus stood, full of bullet holes. The bus, called the “Incident,” was created by Mitic before the tragedy in Newtown in memory of gang violence in his hometown Toronto, but the bus has become a sad symbol of what has happened and could happen again in America’s schools.
Congress returns this week to Washington to continue negotiations on new gun laws that President Obama has demanded and for which he has energetically pleaded in speeches  around the country. And he seems to have support among the American public: 90 per cent support background on people who want to buy guns; 59 percent want ban on military-style automatic weapons (assault weapons) and a majority support other laws on guns and ammunition.
Yet… a victory in Congress is far from certain. The lobby group the National Rifle Association (NRA) has, at least so far, succeeded in preventing any new gun laws.
A depressing article in this weekend’s Washington Post described NRA’s hitherto successful lobbying, both in Congress in Washington and in the state legislatures. It is now clear that there will be no nationwide ban on assault weapons — the votes are just not there. But also other, less controversial proposals, have so far been stopped by NRA and its supporters, who all argue that such laws would violate Americans’ individual freedoms and right to bear arms according to the Second Amendment in the Constitution.
But, the struggle after Newtown has not been entirely without success for Obama and those who urge stricter gun laws. The success has mainly come in states where the Democrats are in control, like in New York State, where Governor Andrew Cuomo, but, especially, New York Mayor Michael Bloomberg, have pushed hard for stricter gun control. Also here in Maryland, where I live, Governor Martin O’Malley has been successful pushing through a number of new gun laws.
Said O’Malley:
“There is a sickness in this country and that sickness is gun violence.”…”These tragedies must end, and to end them we must change.”
And in Connecticut, new gun laws passed last week, but the final victory did not come easily,  according to the New York Times, in spite of Newtown and in spite of a Democratic governor and Democratic majorities in the state Senate and House of Representatives. NRA’s resistance was fierce.
But perhaps NRA’s biggest defeat, and its opponents’ biggest victory, came recently in Colorado, where one in three households own guns but where also tragedies such as in Aurora and Columbine have taken place. In the end, Democratic Governor John Hickenlooper pushed through several new laws.
“If you can do it here (in Colorado), you can do it any place,” was one of the comments afterwards.