My book,”Scandinavians in the State House — How Nordic Immigrants Shaped Minnesota Politics,”  will be out in April, published by the Minnesota Historical Society Press. 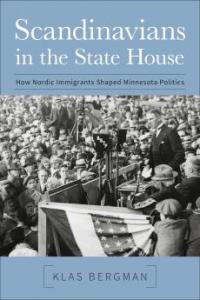 Here’s a blurb about it. The book is:

“The story of Nordic immigrant influence in Minnesota politics and culture, and the lasting legacy of a ‘Scandinavian state in the New World.’

Beginning in the 1850s, thousands of immigrants from Nordic countries settled in Minnesota and quickly established themselves in the political life of their new home. These Norwegians, Swedes, Danes, Finns, and Icelanders first sowed their political seeds at the local level—as town clerks, city councilmen, county commissioners, sheriffs—and then broadened their sights to the state and national realm. Nordic immigrants served as governors, as Minnesota state senators and representatives, as U.S. congressmen, and as vice presidents of the United States. Many came to this country for political reasons and became radicals and activists in Minnesota. Others served as key leaders within the state’s political parties.

In Scandinavians in the State House, Klas Bergman explores who these immigrant politicians were and what drove them to become civically involved so soon after arriving in Minnesota. Profiling the individuals and movements at the forefront of this political activity, at the state and local level, Bergman examines the diverse political philosophies of the immigrant communities and reveals the lasting legacy of Scandinavian politicians in the creation of modern Minnesota—from Nelson and Olson, to Andersen and Carlson, to Humphrey and Mondale.

Klas Bergman is a Swedish-American journalist and author. Born and raised in Stockholm, he is a graduate of Stanford University and has lived and worked in the United States for almost four decades. A veteran journalist and foreign correspondent, he has reported for both Swedish and American news organizations and has also held numerous positions in international/public affairs. Bergman is the author of two previous books — one, in Swedish, on the former Yugoslavia and Eastern Europe, and the second, in both Swedish and English, a personal and political retrospective on his years in the United States. Bergman lives with his wife in Silver Spring, Maryland. Follow him on Twitter @ksbergman.