The “new Americans” spoke today in Minnesota Democratic politics, and although the Somali American challenger Mohamud Noor did not win the endorsement of the delegates to House District 60B in Minneapolis, he prevented veteran liberal lawmaker, 77-year-old Phyllis Kahn, from winning, thereby forcing a primary runoff in August.

Her failure is a victory for what Noor in his speech to the delegates before the vote, called “the new Americans,” like himself, who had fled their bleeding home country and settled in Minnesota in larger numbers than anywhere else in the United States. A victory, he said before the vote, would demonstrate that the Democratic Farmer Labor Party (DFL) in Minnesota is “serious about inclusion.” He did not quite make it, but he has another chance to win, in August. 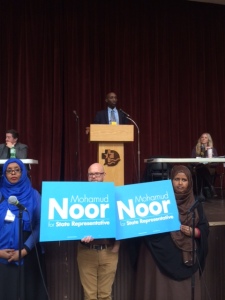 Noor, a recent new member of the Minneapolis school board, said that he and his family had “achieved the American dream,” and he stressed the importance of education and pre-kindergarten for all. He was ready to fight for everyone in the district, which includes Somali immigrants in the classic Scandinavian immigrant neighborhood of Cedar-Riverside, students from the University of Minnesota, and scores of progressive activists.

Should Noor win the DFL primary in August, he is practically guaranteed a victory in November in this solidly liberal House district. And if so, he will be the first Somali American in the State Legislature and the highest elected Somali American official in Minnesota. Today, Abdi Warsame, who was elected to the Minneapolis city council last November with overwhelming support from the Somali residents of Cedar –Riverside, holds that title. Warsame also had the support of Phyllis Kahn and today he backed her, splitting the Somali vote in the packed auditorium in DeLaSalle High School on Nicollet Island in the middle of the Mississippi River, just underneath the towers in downtown Minneapolis.

Today’s convention took all day, with breaks for lunch and prayer. The delegates showed remarkable stamina and few left between the five rounds of voting. Still, the 277 total votes cast are only a fraction of the eligible voters in District 60B. The August primary will all be about turnout, and it would be unwise to count out a veteran like Phyllis Kahn.

For the Somali immigrant community seeking political clout just like other immigrant groups have sought before them, it is yet another big challenge.