On the road again…

…and once again to Pittsburgh, the old steel city among the green hills of western Pennsylvania, where old friends live in a city of optimism and hope. 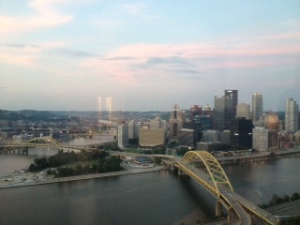 From Mount Washington, where the Monongahela and Allegheny rivers come together and become the Ohio River, the view of downtown Pittsburgh from the steep mountain as dramatic as in any other American city. Below, some twenty bridges in all directions cross the rivers between the city’s many neighborhoods. Among the skyscrapers downtown are some of America’s finest buildings, from the days of Carnegie, Heinz, and Mellon to modern masterpieces by Philip Johnson and others, and to native sons Andy Warhol’s and August Wilson’s museum and cultural center, respectively.

And across the rivers lie the splendid ballparks for the Steelers and the Pirates, important landmark in a city of passionate sports fans.

Coming into the city, along Monongahela River in Mon Valley, where the steel mills lie as giant monuments to a bygone era, side by side, mile after mile, in the small towns of McKeesport, Braddock, and Homestead, with furnaces long since cold and chimneys without smoke, the optimism and sense of hope might be a bit hard to understand. At its peak, the steel mills employed well over 100,000 workers, but in the crisis of the 70s and 80s, most of them lost their jobs, and Pittsburgh’s steel industry is only a fraction of what once was.

Today, Pittsburgh is the prime example that the old industrial cities in the “Rust Belt” can come back. But the recovery is based on something completely different than the steel, on distinguished universities and hospitals – biotech, green technology, health care, finance, and research. Today, the University of Pittsburgh Medical Center’s (UPMC) logo is seen on top of what once was U.S. Steel’s 64-story headquarters, and with its 50,000 employees, the university hospital is western Pennsylvania’s largest employer.

It’s a city of history and character, and of excitement. I will return, again.